Viacom blocks YouTube Video!  Here’s a screenshot of a video which WAS a clip of Daily Show’s Jon Stewart riffing on Obamacare;

OF COURSE Viacom is fully within their rights to take action against anyone who grabs a video snippet of their television productions and re-posts them on YouTube.  That is, by definition, copyright infringement.

HOWEVER, the question is, “should they do this?”  The nature of the YouTube post was that someone thought the clip was awesome/entertaining/relevant/etc. … and wanted to share it with the rest of the world.  Isn’t that the point of creating this type of content to begin with?  It seems a lot like a case of the Viacom attorneys biting the hand that feeds them — not to make an analogy to Viacom attorneys and biting dogs (nope. no way. no siree).  But, even more disturbing it that this happens without any other concerned Viacom employees (e.g. the V.P. of marketing, V.P. of operations, V.P. of Social Media, President, CEO, Board of Directors, ANYone!) being able to step up and say, “This probably isn’t a good long-term strategy!”

So, let’s do a little breakdown of the issues at hand;

It seems like a lot of pretty big benefits being tossed out the window all for the sake of protecting your copy rights.  I can easily imagine the network closing its doors, trampling the trust of the stockholders, but being able to say in their heart-of-hearts, “BUT WE PROTECTED OUR COPY RIGHTS!”

What say you?  Do you agree? 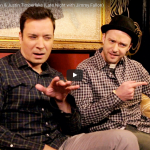